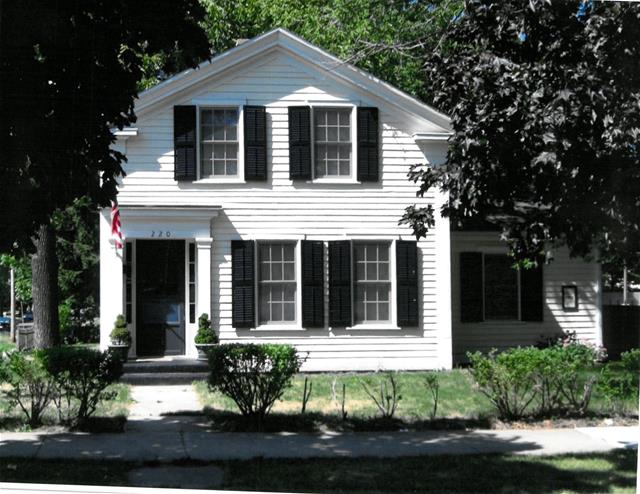 The Benjamin Merchant residence at 220 W. Julian Street is a highly significant structure that is a contributing landmark in Waukegan's Near North Historic District on the National Register of Historic Places (listed May 3, 1978). The iconic home portrays a significant value as part of the historic, heritage or cultural characteristics of the community. The residence is also representative of the distinguishing characteristics of Greek Revival architecture inherently valuable for the study of a period, type, method of construction and use of indigenous materials.

The home was constructed circa 1842 and is known to be the oldest home in Waukegan. Built in a simple Greek Revival style which was popular in Waukegan in the 1840's, but had already gone out of favor in the Eastern United States. Many early residents of Waukegan were transplants from upstate New York where this style had been popular and new residents were comfortable applying this style in their homes in the newly-settled area. The Greek temple style gabled end facing the street with a wide frieze and corner pilasters along with a simple front door with a small portico and side light framing the door were typical of the simple Greek Revival style.

This residence was listed as a contributing structure in the application for the Near North Historic District and was designated a Bicentennial Landmark during that celebration. The home remained in the same family from the time it was built circa 1842 until it was sold in 1982, a remarkable period of about 140 years. Standing next to a large apartment block and being overshadowed by that building and the large Post Office across the street, the little home retains a noble dignity inherent in the simple Greek Revival style.