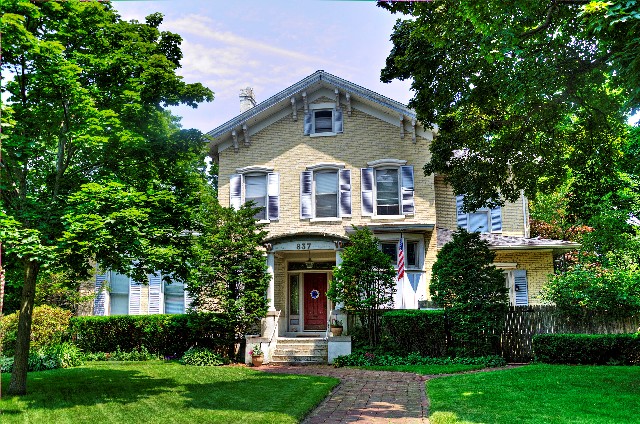 The City of Waukegan recognizes the David Ballentine Residence's identification with a person who significantly contributed to the development of the City of Waukegan. It was built during a time of tremendous growth in Waukegan's history. Ballentine, an early pioneer to Little Fort (Waukegan), Illinois, helped bring rail service to the city as a charter commissioner for the Illinois Parallel Railroad Company. Ballentine served two terms as President of the Village Board of Little Fort and was elected as the second mayor of the city, ultimately serving three terms from 1860-1862.

When news of the Civil War made its way to Waukegan, Mayor Ballentine organized public meetings at the Lake County Courthouse to rally citizens to volunteer for service in the Illinois State militia and to support the Union cause. Company H, Waukegan Zouaves was formed from these meetings with local men volunteering for service. Money was also raised to help fund this company by Mayor Ballentine.

The City of Waukegan finds the David Ballentine Residence representative of the distinguishing characteristics of architecture inherently valuable for the study of a period, type, method of construction or use of indigenous materials. The David Ballentine Residence is an excellent example of the Italianate style which dominated American construction at that time and was prominent following the Civil War (1861-1865). The David Ballentine Residence epitomizes the Italianate architectural style with wide cornices with brackets supporting the roof and molded window caps remain from the original exterior. The residence was constructed with Milwaukee Cream Brick, also known as Cream City Brick. This distinctive cream or light yellow colored brick was made from clay found around Milwaukee, Wisconsin, in the Menomonee River Valley and the western banks of Lake Michigan.