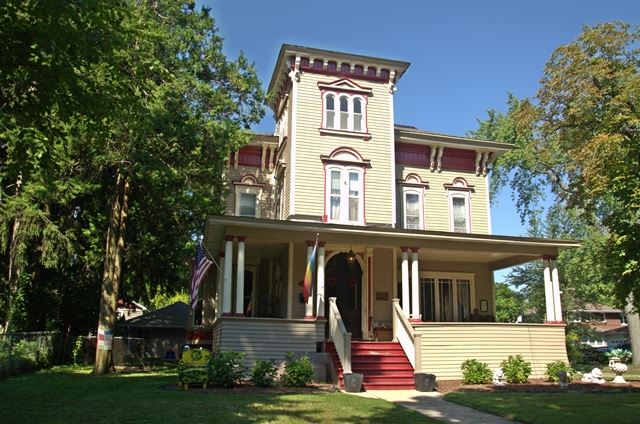 The Isaac R. Lyon home at 946 N. Sheridan Road is a highly significant structure that is a contributing landmark in Waukegan's Near North Historic District on the National Register of Historic Places (listed May 3, 1978). The iconic home portrays the heritage and cultural characteristics of early Waukegan, identifies with a person who significantly contributed to the development of the community, and is representative of the distinguishing characteristics of an architectural style.

The home was constructed circa 1873 by architect/contractor George Brean for Isaac R. Lyon (1815-1893). It is a fine example of the Italianate style of architecture that was prominent following the Civil War (1861-1865). Lyon, an early pioneer to Little Fort (now Waukegan) established a general merchandise business in 1843. This business proved successful and Lyon rose to a prominent stature gaining the nickname of Waukegan's "merchant prince." The origins of Waukegan's name can be traced to Isaac R. Lyon as he was part of the three member committee that was formed to consider names to replace the town's original title of Little Fort. This committee recommended the name Waukegan and residents formally approved the choice by ballot on March 31, 1849.

The home itself has an interesting history. It was originally located on the northwest corner of Sheridan Road and Grand Avenue. The home was moved in the mid-1880s to its current location by George R. Lyon (1846-1913) after the passing of his father Isaac.

Much of the original Italianate exterior features of the home remain including: balanced, symmetrical rectangular shape; tall appearance; wide overhanging eaves with brackets; side bay windows; tall, narrow windows with hood moldings; arches above windows and doors. The tower or cupola has been lost. However, it is the intent of the owners to re-build a cupola appropriate for that period of design.