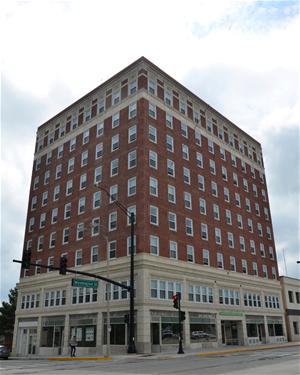 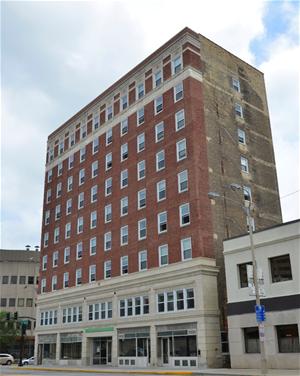 The Karcher Hotel, a.k.a. The Karcher Artspace Lofts, is a highly significant structure in the commercial and social history of Waukegan. It was built during a time of tremendous growth in Waukegan's history and played a major role in the city until the mid 1980's. The redevelopment of this building into the Karcher Artspace Lofts in 2012 has helped nurture an emerging arts community while bringing renewed vitality to downtown Waukegan. Its redevelopment has turned an eyesore of the downtown into a destination point for visitors and Waukegan residents alike.

Construction on the Karcher Hotel began in early 1927 on the corner of Washington and Utica (now Martin Luther King, Jr. Avenue) Streets and finished on October 6, 1927. The building was planned, developed and financed by George W. Benfer of Freeport, IL and built by architect BK Gibson of Chicago. The day after construction finished, on October 7, 1927, the Waukegan State Bank valued the land at $55,000 and the building with all equipment at $460,000 for a grand total value of $515,000. The newspaper reported the Hotel to have an estimated gross income of $134,160 with $55,000 in expenses for an estimated net income of $79,160. The name Karcher was selected in a contest by Justice Harry Hoyt.

The Karcher Hotel opened on June 28, 1928 and contained nine stories with 150 rooms and 120 bathrooms. The Karcher was wider than the Waukegan Hotel, which had 150 rooms on twelve floors. There were two large dining rooms and a 20 x 50 feet lobby with bronze and gold leaf décor and bronze lighting fixtures throughout. A fireplace, large staircase, and mezzanine completed the design of the interior lobby. There were five storefronts accessible from either the lobby or the street and a café on the first floor. The second floor contained banquet space with a large wall mural and administrative offices and there was a billiard room in the basement. A postcard advertised a beacon on the roof of the building for visitors to follow. The heating system was vapor steam that was regulated by each occupant and there was a central vacuum system. The elevator machinery was put on the asphalt roof to lessen the noise throughout the Hotel.

The exterior of the Karcher Hotel is a modified Italian Classical Revival design in light gray terra cotta, red and dark brick, and gray terra cotta. The first two stories are faced with light gray terra cotta; the third through the eighth stories are faced with red brick. The upper section was once topped with a terra cotta cornice, but the imminent danger of the cornice crumbling and falling onto the sidewalks below led to its removal, preservation and safe storage in 2012 during the Karcher Hotel's most recent renovation. There is an elaborate classical frieze around the outside of the top and lower section of the building as well as leaf, egg, and dart patterns.

The Karcher Hotel's unique location marks the western gateway into Waukegan's downtown along Washington Street. Its nine-story height towered over other buildings in the immediate area with only the Waukegan Hotel, Waukegan Building, and the Lake County Building higher.

In 1965, the Karcher Hotel was bought and renovated by James Collins and Nick Penn and the name was changed to the Collins-Karcher Hotel. In 1980, it was bought by Pilgrim Housing Partners of Oak Park, IL for a retirement home and reopened on May 26, 1982 as the Hotel for Active Seniors. Pilgrim Housing spent $1 million dollars on renovating and restoring the building, including restoring the terra cotta, the plaster lobby ceiling, terrazzo flooring, elevators, railings, and heating system. They also added a red awning and replaced the windows.

On Christmas morning in 1984, a fire broke out in the interior wood and plaster wall of the Hotel and burned into a clothing store on the main floor. Eight people died from carbon monoxide poisoning, seven were injured, and four were hospitalized. This was the second fire in the Hotel's history; the first was in 1978 but did little damage. The fire of 1984 is known as the worst fire in Waukegan's history.

In February of 1988, the owner began rehabilitating the building and received a court order to finish the work by March and remove all boarding from the windows and replace the windows and exterior canopies as well as clean up the smoke damage. This was never finished. In March of 1990, the Karcher was purchased by Al Mini who planned to turn it into a Landmark Center and complete a $750,000 renovation. Mini renovated three floors until the water pipes burst and flooded the building. In 1996, an engineering survey showed damage in the form of a 10 feet wide and 4 inch high bulge in the brick veneer.

Since 1984, the Karcher Hotel sat empty and damaged. It was usable downtown space and throughout the last 27 years, ideas have included turning it into a retirement home again. The city even filed suit to demolish the building in 1987. But despite the myriad of changes, the Karcher Hotel still stands today. In October 2011, Karcher Artspace Lofts, LP of Minneapolis, Minnesota purchased the building to convert the hotel into 36 units of "live/work" space for artists and their families. Additional retail space is available on the ground floor for complementary small businesses and non-profit organizations. The conversion of the Karcher Hotel into the Karcher Artspace Lofts has brought a renewed energy to the area by transforming one of the downtown's oldest and tallest buildings into a lively and active residential community.

The Karcher Hotel was listed on the National Register of Historic Places on August 9, 2002.