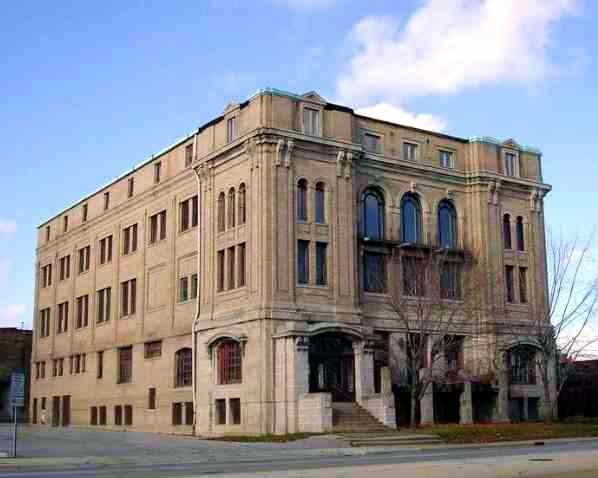 On March 7, 1919, the Board of Directors of the Waukegan Masonic Temple Association voted to purchase the "Dickinson property" from William I. and Charles R. Lyon who operated C.R. Lyon & Sons, located on Genesee Street. Samuel Schwartz purchased the old Temple on February 2, 1920 for $21,500 and allowed the Masonic bodies to remain until the new Temple was completed. Mancel Talcott was Secretary of a building committee with Thomas Arthur Simpson as Chairman, to raise funds and oversee the construction. Other committee members were Charles L. Whyte, Treasurer; William S. Watrous; Jay L. Brewster; Alva L. Rogers; Ray Whitney; Dr. Charles E. Daniels; Clarence S. Alshuler; Arthur E. Stripe and John S. Banta. E.E. Roberts of Chicago was selected as the architect and Hanson Brothers, also of Chicago, was the contractor for the new Temple for $136,000. The cornerstone was laid April 24, 1920.

In February, 1920, the Masonic Temple Building Association sent out a fundraising letter to all members in the vicinity. According to this letter, the contract price was $136 ,500 for the complete building except for lighting fixtures and decorating. The contractors were the Hanson Brothers of Chicago, who also built the hospital group of buildings at Great Lakes Naval Station in North Chicago. At the time of the letter, the excavation had already been started. According to the News Sun, the building was completed in 1921.

The Masonic Temple was designed by the well-known Oak Park architect Eben Ezra Roberts, commonly known as E.E. Roberts. He is often referred to as "the Other Oak Park architect" or as "the celebrated Oak Park architect ... " Originally from Boston, his woodcarver father trained him in both mechanical and freehand drawing. He also studied at the Tilton Academy in New Hampshire. He started his Oak Park practice in 1893, designing over 200 homes as well as several commercial structures in the Oak Park-River Forest neighborhood, several of which are considered Significant Structures in Oak Park. His designs were in many different styles, including Classic Revival, Medieval Revival, Shingle, Queen Anne and Early Modem. He was also influenced by the emerging Prairie Style, but evolved his own personal style. In 1912, E.E. Roberts moved his practice to Chicago in order to concentrate on commercial buildings, including the Masonic Temple. Roberts also designed other Masonic Temples, including the 1906-1909 Oak Park Masonic Temple, and another in Forest Park.

The Waukegan Masonic Temple is in an excellent example of Roberts' architectural skill at interpreting historical styles to suit a project. It was designed as his interpretation of the Italian Renaissance style, although in some ways it could be considered more Italianate than purely Italian Renaissance due to his looser interpretation and details such as brackets at the cornice. The overall massing also is characteristic of the Commercial Style, like other buildings in Waukegan such as the Hotel Waukegan, as defined by architectural historian, Richard Longsteth. These buildings were typically arranged into a distinct set of three zones, similar to the divisions of a classical column: the base, shaft, and capital.

The front facade has a base of ashlar limestone, with matching cream colored brick above. It is mostly symmetrical, with projecting bays on each side. The left-hand bay entrance is covered with a stone canopy supported by stone scroll brackets, with a similar canopy over arched windows at the right-hand side. The first floor is terminated with a limestone water table. The shaft portion in this instance is the second and third stories. The comer bays have brick pilasters on each side, terminating in brackets · supporting a limestone cornice. The third floor primary windows are arched, and the central windows feature iron balconies, which are currently hidden behind trees. The fourth story then becomes the capital, with small windows acting as the primary detailing.

The side facades continue the same detailing for the first bay, but become more simple further back. The first floor windows especially are no longer symmetrical, but are arranged as dictated by the functional spaces inside the building. The second and third floors are more regular, with seven bays of double double-hung windows separated by brick pilasters with abstract brick capitals. The exterior seems to be almost completely intact and has not undergone any remodeling, which adds to its significance.

An elaborate, four story Masonic Temple was completed and occupied in 1921. It had a large entry hall and separate lounge area on the first floor along with a ballroom equipped with a complete stage. The second floor had a small lodge room and lounge and the third floor a beautiful large lodge room boasting a huge pipe organ, donated by the Eastern Star. The fourth floor was locker rooms and storage. There were numerous offices and store rooms throughout. The basement had a large kitchen and dining room. Old newspaper articles show that this building was one of the centers of social activity in Waukegan at the time. A fundraising Ball was held there on Halloween night in 1924 for the new Victory Memorial Hospital, now known as Vista East Hospital.

The Temple served well until Masonic activity began to decline after 1960. There were bursts of half-hearted attempts to sell it and build a smaller Temple for several years The Temple was sold in March of 1982 and has remained vacant ever since.