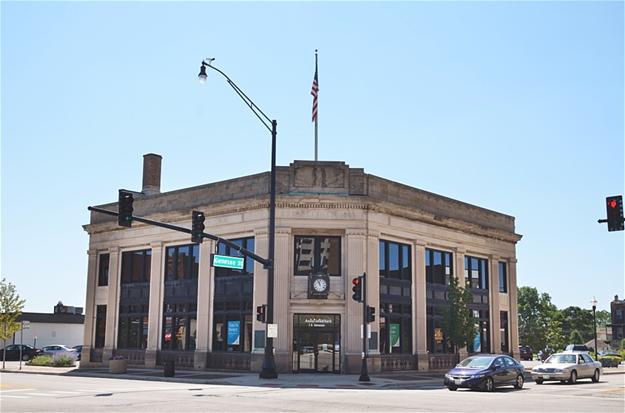 1 S. Genesee is a highly significant building in the history of Waukegan, largely because it was the home of the oldest bank institution in Lake County, Illinois, as well as being a highly recognized landmark in the community and a handsome example of a Classical Revival bank building.

The National Banking Act of 1864 established and regulated banking, offering the first steps towards protecting both bankers and depositors. The Steeles were among the early applicants for a national bank charter. On April 17, 1865, the bank began operating as the First National Bank of Waukegan. Charles Steele continued as President of the bank until his death in 1888.

The other notable event of 1925 for the bank was completion of the new bank building at 1 S. Genesee. The grand opening was held March 7, 1925. Regrettably, there seems to be no record surrounding the construction other than the invitation to the Grand Opening.

It is a two-story Classical Revival Style (Neoclassical) stone-clad building constructed by the Hoggson Brothers of Chicago. The two-story fluted pilasters are capped with egg-and-dart capitols, in a Chicago Style influenced massing. The cornice above features a dentil molding and watertable, with a bas-relief eagle at the corner. The sign "FIRST NATIONAL BANK ESTABLISHED 1865" is carved into the cornice. The interior featured marble floors, brass chandeliers, and a large skylight. The vault was of steel-reinforced concrete, wired with electric burglar alarms.

During has administration, Charles N. Steele opened a free parking lot north of the Waukegan Hotel for the bank's customers. He also celebrated the bank's 100 year anniversary. In 1962, with an estimated 4,000 people at an Open House. The bank opened it first after-hours walk-up window in 1962 and its first drive-up windows in 1963.

Charles Steele was succeeded by his son, Charles Nelson Steele Jr., in 1967. In 1979, after a year of rumors, the Steele family sold a majority interest in the bank to Irwin A. Goodman, Raymond A. Eiden and Harry J. Bystricky. Shortly afterwards, the new owners began renovating the bank.

The first phase of renovations was the interior. The skylight had been covered up, and uncovering the skylight was the major discovery during the project. The skylight was restored. The original desks were replaced with new period furniture. The Steele family kept some of the desks, while others were donated to historical societies.

In 1988, the owners worked on the façade, replacing the original double-hung windows and spandrel panels with new energy efficient storefront windows in the same openings. While not historically accurate, they keep a similar rhythm to the originals and are not obtrusive. The other façade change over the years has been the two different clocks that have hung over the front door.

According to an advertisement in the News Sun on April 8&9, 1989 "In view of our continuing growth and expansion throughout Lake County and northern Illinois, we thought it appropriate to return to the origin of our roots. As a result, our bank will once again be known throughout the state as Bank of Northern Illinois, N.A."

Irwin Goodman passed away in 1999. Raymond Eiden and the other owners sold the Bank to State Financial in Wisconsin, finalizing the deal in 2000. In April, 2005, Associated Banc-Corp announced plans to acquire State Financial Bank. After the acquisition, 1 S. Genesee became known as Associated Banc-Corp, continuing a tradition of banking. And while the bank has changed ownership over the years, it is significant that it has always functioned as a bank building, enhancing its potential for landmark status.