The South Side Fire Station 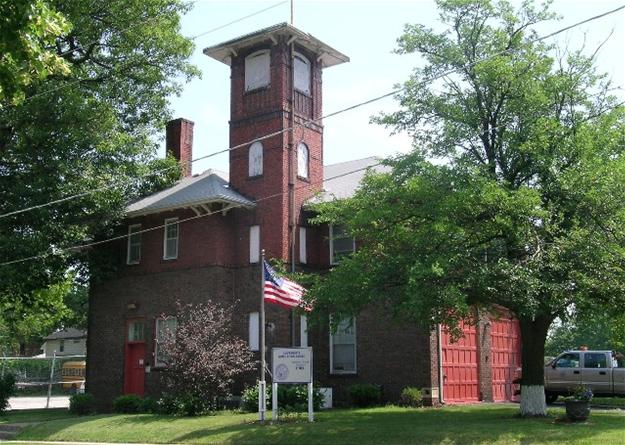 The history of the Waukegan Fire Department dates back to the year 1847 when a Bucket Company and a Hook and Ladder Company were organized. In 1852, a hand engine, hose reel and other equipment were purchased and the Department was organized into three divisions - Fire Company, Hose Company and Hook and Ladder Company. By the early 1900s, the growth of Waukegan brought about the need for the construction of a second fire house on the south side of the city.

This firehouse was completed in 1911. The general massing of the structure is reminiscent of the Italian Villa style of architecture, with a tall imposing four story tower dominating the design. The tower was decorative as well as functional, as the fire hoses were hung inside at full length to dry. The detailing of the building is more consistent with the Craftsman style which had gained popularity by this time. A darker brown brick covers the first story, with a lighter red brick found on the second story and tower. A particularly fine feature of the design is the brick corbelling found on the upper story of the tower which creates a series of geometric patterns on the wall surfaces around the window openings. The broad overhanging eaves on the building are supported by simple but substantial wood brackets. Window openings feature multi-paned sashes in 8-over-2 and other combinations. A pair of wooden doors dominate the façade.

In November 1976 the fire station was recognized by the Waukegan Bicentennial Commission as one of 27 architecturally significant buildings in the City to be designated as Bicentennial Landmarks. In 1983 the station was closed after 72 years of service, when the new central station at Jackson Street and Belvidere Road opened. For the next ten years, the building sat vacant awaiting a new life. By 1993, the City had invested approximately $80,000 into refurbishing the building to house the offices of the Building, Zoning and Code Enforcement Departments. When it was determined that this plan would not work, the City deeded the property to Waukegan Township for the creation of Lake County's first designated homeless shelter.

Milton Staben, long time Township Supervisor had died in April 1993 and for years had a dream of establishing a shelter for homeless single men, following the closure of the downtown YMCA. New Township Supervisor Patricia Jones spearheaded the effort to convert the fire station into the Staben Center in his honor. On October 29, 1993, the Center was officially dedicated to Staben, and his son Peter, an attorney who had died three months before his father.

The shelter has a capacity of fifteen, who are in residency up to six months with six additional months of counseling and case management afterwards. Educational and vocational training services are provided along with sessions for those with substance and alcohol abuse issues. The Home Sweet Home program was established whereby residents assist the elderly with snow removal and lawn care. In 1994, the Center was the first place winner in the Governor's Home Town Award for the valuable services it provides. The Center estimates that well over 2,500 men have been helped during its thirteen years in operation.

The fire station, a local "landmark" in the general sense since its construction, is an excellent example of the possibilities of adaptive reuse, when a structure ceases to function in its original capacity and finds a new and effective use to ensure its survival into the future.