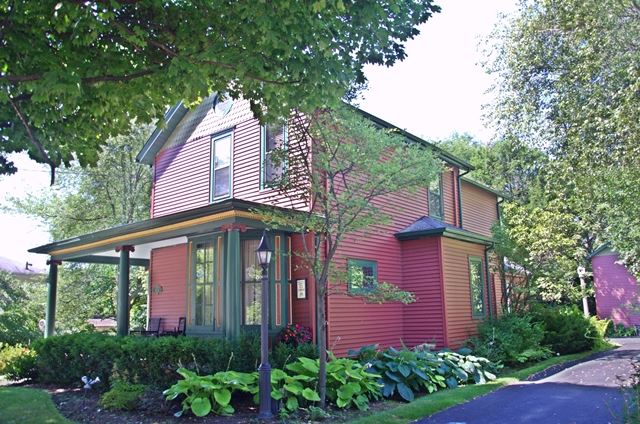 This house was built about 1850, pre-dating the incorporation of Waukegan as a city by nearly a decade. The original house, probably a good deal smaller that the structure we see today, was built in the vernacular style, sometimes also referred to as "farmhouse" style. The simple lines and balloon-frame construction incorporated in this style made it possible for homeowners to construct their own homes without the services of an architect or experienced contractor. As Waukegan grew, so did these houses, both with the addition of modern amenities including bathrooms and kitchens, as well as upgrading the style of the house on the exterior. The paneled bay windows marking the location of the two parlors, and the gracious wrap-around porch with Ionic columns are typical of the late 19th-century modifications made to these early homes. The original coach house, located immediately north of the residence, is a very rare survivor of late 19th-century outbuildings and still retains its original hayloft and carriage doors.

The house was built for John McKey, a miller born in Vermont in 1811. By 1890, it had been acquired by William and Alice (Paddock) Smith, early Lake County settlers. Their two children both became prominent Waukegan citizens. Daughter Genevieve married Cyrus Blodgett, son of a two-term mayor of Waukegan, and she remained in the house until her death in 1954 at the age of 75. Son Ashbel V. Smith became a prominent lawyer, attained the rank of Colonel during World War I, and served as Illinois State’s Attorney from 1920 to 1932. At the time of his death in 1936, it was said that "Ashbel V. Smith rose to a place of great prominence and even greater eminence in Waukegan, Lake County, and Illinois. He was a great soldier and a gracious citizen of Waukegan."

After passing through several additional owners, it was acquired by the current owners, Dr. Thomas Barrett and Dr. Janine Goldstein in 1990. They have carefully maintained and restored the house during their ownership, preserving this early example of vernacular architecture in both the residence and carriage house. 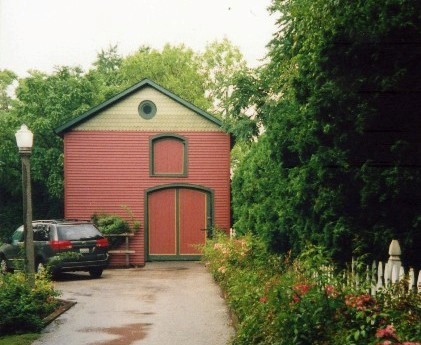 Carriage House in Back Yard