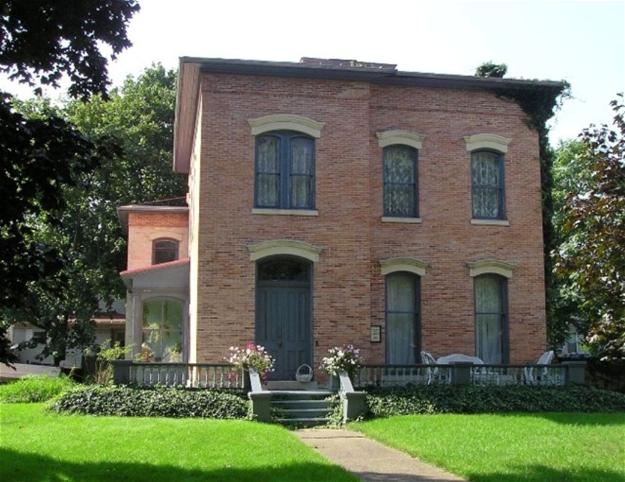 This home was built in 1857 for Dr. Moses Evans, who owned a medical practice with Dr, David Cory, one of Waukegan's most prominent early residents. The two-story brick house is built in the Italiante style with tall arched windows, an open porch across the facade and a simple unadorned cornice. The property was originally five times larger than it is today and extended west to Genesee Street. In 1862, Evans was mustered into the Union Army as a surgeon with the Illinois 96th and traveled extensively with General Grant, being present at the battles of Chikamaunga and Chattanooga, where he was wounded. He returned to his home in 1865 at the conclusion of the war, and soon after sold the property for $7,800 to raise needed funds to restart his medical practice, located at the corner of Genesee and Washington. He later served as Waukegan postmaster.

The house has had six owners since Dr. Evans sold the property, including a prominent dentist (Dr. Shugart), the owner of a roofing company (Ford), and the owners of a vacuum company (Morrow). The rear addition was added in the 1970's and includes a servant's wing on the second floor. While owned by the Morrow family, it was converted to a two-flat. During World War II, it served as a nursery, where mothers could drop off their children for day care, allowing them to join the work force as part of the war effort.

At the close of the war, it was bought by an accountant, Leonard Murray, who owned several rental properties. He converted it into an apartment building, with each room being rented separately. When the current owner, Randy Bowcott, acquired the property in 1981, it was being used as a four-unit apartment building. He gradually deconverted the property back into a single-family home. The exterior and interior have been extensively and accurately restored to their original 1870 appearance.