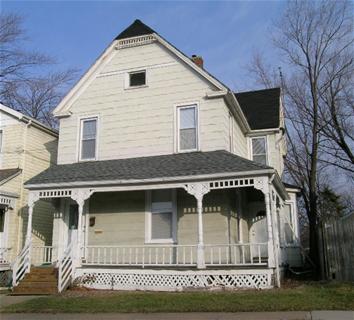 The two-and-one-half story frame house at 518 Clayton Street was built about 1895 for Peter Paulson, a Danish immigrant employed as a railroad conductor. At the time of construction, a second "mirror-image" house was built next door at 520 Clayton Street, differing only in the treatment of the attic level. Paulson, his wife Jennie and their children occupied the house until 1909 when it was rented to the Kubelsky family for two years. (Benjamin Kubelsky later changed his name to Jack Benny).

The house is a typical late 19th-century middle-class dwelling in the homestead style with a front-facing gable. The original wrap-around porch with intricate fret sawn trim remains in place as does the simple ball-and-stick fretwork beneath the jerkin-head gable. Asbestos shingles have sheathed the house since at least the 1940s, and new windows and front door have recently been installed. In spite of these modifications however, the overall massing and details of the houses are unchanged since the occupancy by the Kubelsky family, and the house would easily be recognized by Jack Benny were he to visit Waukegan today. The Kubelsky family rented a number of different apartments and houses in Waukegan during the years that Jack Benny was growing up. This house is the last of these sites which still stands.

Jack Benny was one of the first major radio personalities to make the successful transition to television. A huge star on radio ever since his 1932 debut on the Ed Sullivan show, Jack Benny's own television show premiered on CBS on October 28, 1950. This immensely popular show remained on the air for 15 years. Always loyal to his hometown of Waukegan, he frequently mentioned the city in his broadcasts, putting Waukegan on the map and forever linking himself with the city in which he was raised.

Jack Benny was born Benjamin Kubelsky on February 14, 1894 to Mayer and Emma Kubelsky. A younger sister Florence followed seven years later. The family resided in many different apartments and rented houses during Benny's childhood. His father was the proprietor of the Lake County Wine & Liquor Company, and later was a partner in a furniture and clothing business called Kubelsky & Gordon.

In 1909, the family rented the house at 518 Clayton Street, and they remained here through 1910. This was an important time in young Benny's life. He had learned to play the violin at an early age, and in 1910, while living in the house, received his first break, obtaining a job playing the violin in the pit of the Barrison Theatre, which was located at 25 S. Genesee. He eventually developed a vaudeville act of his own known as Salisbury and Benny, developing his trademark penny-pinching persona and impeccable sense of timing. He married Sadie Marks in a friend's apartment at the Clayton Hotel (southwest corner of Sheridan and Clayton) on January 14, 1927.

Even after achieving stardom, Benny never forgot his roots, and frequently returned to Waukegan, where his parents and sister are buried. His visits, known as "Jack Benny Days," brought out brass bands and huge crowds of fans. The largest of these events was the world premiere of his movie "Man About Town" at the Genesee Theatre on June 25, 1939. His final visit occurred in 1974 when he gave a benefit performance with the newly formed Waukegan Symphony Orchestra. He died in December of that year at the age of 80.

Several sites in Waukegan have been named in honor of Jack Benny including the Jack Benny School, the Jack Benny Center in Bowen Park and Benny Avenue, in addition to the installation of Jack Benny Plaza and Statue and his recognition in the Walk of Stars Park. This house however, is the last surviving building with a link to his years in Waukegan and therefore deserves landmark designation in honor of Benny's many accomplishments in the entertainment industry and his lifelong commitment to his hometown.