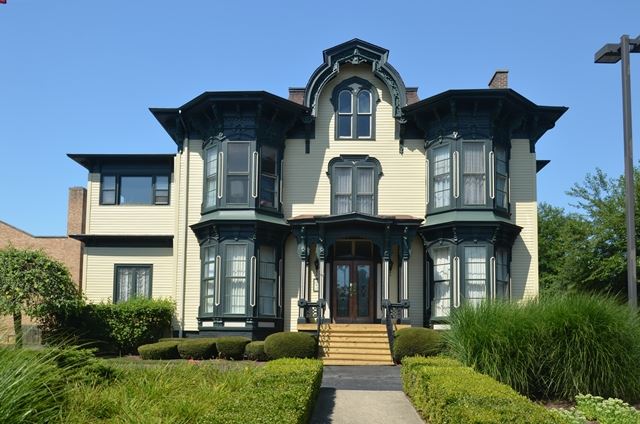 The Judge Francis E. Clarke Residence is an excellent example of the transition from the Italianate to the Queen Anne style that was typical of the 1870s. Although it displays many of the classic features of the Italianate style, there are features that definitely foreshadow the coming popularity of the more unrestricted Queen Anne. Porter Brothers, the builder of the home, built many homes in Waukegan during this period, and their trademark details are in evidence here.

Construction on the house began in May 1875 and concluded in March 1876. The work is particularly well documented in the diaries of David Simpson, a carpenter employed by Porter Brothers. It would have been one of the largest homes in Waukegan at the time of its completion. This, together with its prominent siting on Sheridan Road, spoke to the prominence of its owner, Judge Francis E. Clarke. Significant features displaying the Italianate style include the pair of symmetrical bays with tall narrow windows, the elaborate bracketed cornice and the intricately detailed porch. The Queen Anne is best represented in the unusually shaped central dormer with finely proportioned "gingerbread" trim.

Clarke was born in Vermont in 1828 and following graduation from Dartmouth College in 1851, moved to Waukegan where he was employed as a teacher and then principal of the Waukegan Academy. The following year he was elected Lake County Superintendent of Schools. He was admitted to the Lake County bar in 1855 and formed a law partnership with James S. Frazer under the name of Frazer & Clarke. He was one of the incorporators of the First National Bank of Waukegan, and served as a director and vice-president. In 1879, he was elected County Judge in Lake County.

Clarke died in 1899, and his widow in 1903. Their children continued to occupy the house until 1921 when it was sold to Wetzel & Peterson, funeral directors. That firm had its origins in Marr, Reid & Company which had been founded in 1865 on Genesee Street. The current business, Peterson & Patch Funeral Home, is a direct descendant of that original firm.

Additions to the rear and side have done little to detract from the original design of the house, and today it stands as one of the most prominent and dignified structures along Sheridan Road. Its long use as a funeral home has proven to be a compatible use that has ensured its survival.